Obesity impacts fertility and is positively correlated with endometrial hyperplasia and endometrial cancer occurrence. Endometrial epithelia often harbor disease driver-mutations, while endometrial stroma are highly regulative of neighboring epithelia. Here, we sought to determine distinct transcriptome changes occurring in individual cell types in the obese mouse uterus. Outbred CD-1 mice were fed high-fat or control diets for 18 weeks, estrous cycle staged, and endometrial epithelia, macrophages, and stroma isolated for transcriptomic analysis. High-fat diet mice displayed increased body mass and developed glucose intolerance, hyperinsulinemia, and fatty liver. Obese mouse epithelia displayed differential gene expression for genes related to innate immunity and leukocyte chemotaxis. The obese mouse stroma differentially expressed factors related to circadian rhythm, and expression of these genes correlated with glucose tolerance or body mass. We observed correlations between F4/80 + macrophage numbers, Cleaved Caspase 3 (CC3) apoptosis marker staining and glucose intolerance among obese mice, including a subgroup of obese mice with high CC3 + luminal epithelia. This subgroup displayed differential gene expression among all cell types, with pathways related to immune escape in epithelia and macrophages, while the stroma dysregulated pathways related to regulation of epithelia. These results suggest an important role for differential response of both the epithelia and stroma in their response to obesity, while macrophages are dysregulated in the context of apoptotic epithelia. The obesity-related gene expression programs in cells within the uterine microenvironment may influence the ability of the endometrium to function during pregnancy and influence disease pathogenesis. 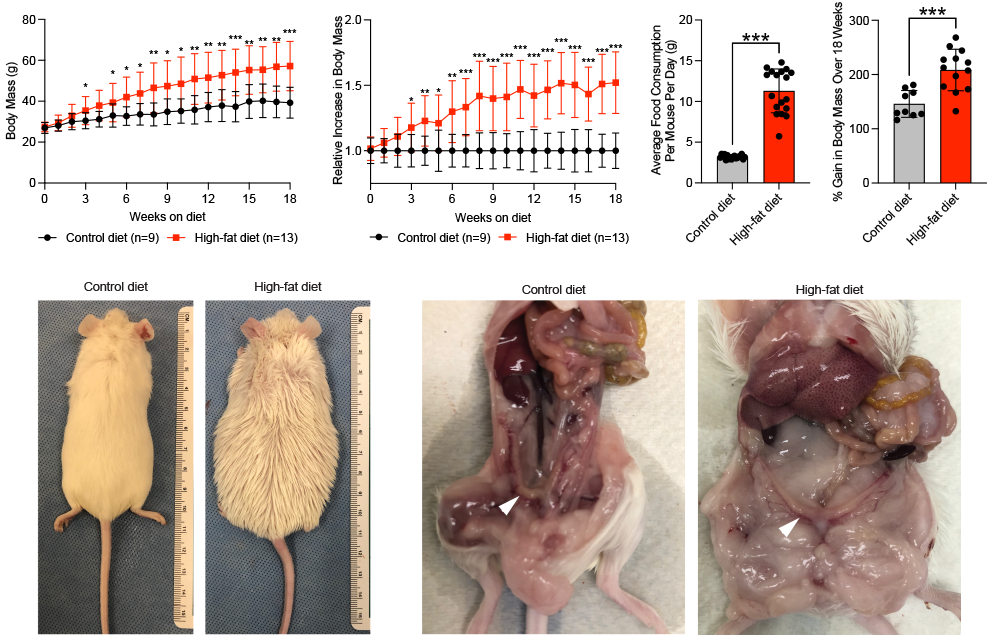 SWI/SNF (BAF) chromatin remodeling complexes regulate lineage-specific enhancer activity by promoting accessibility for diverse DNA-binding factors and chromatin regulators.  Through genome-wide analysis of human endometriotic epithelial cells, we show that more than half of ARID1A binding sites are marked by the variant histone H3.3, including active regulatory elements such as super-enhancers. ARID1A knockdown leads to H3.3 depletion and gain of canonical H3.1/3.2 at ARID1A-bound active regulatory elements, and a concomitant redistribution of H3.3 toward genic elements. ARID1A interactions with the repressive chromatin remodeler CHD4 (NuRD) are associated with H3.3, and ARID1A is required for CHD4 recruitment to H3.3. ZMYND8 interacts with CHD4 to suppress a subset of ARID1A, CHD4, and ZMYND8 co-bound, H3.3+ H4K16ac+ super-enhancers near genes governing extracellular matrix, motility, adhesion, and epithelial-to-mesenchymal transition.  Thus, ARID1A-containing BAF complexes are required for maintenance of the histone variant H3.3 at active regulatory elements, such as super-enhancers, and this function is required for the physiologically relevant activities of alternative chromatin remodelers.

Endometriosis is a disease defined by the presence of abnormal endometrium at ectopic sites, causing pain and infertility in 10% of women. Here, we describe a role for AP-1 subunit JUNB in promoting invasive phenotypes in endometriosis. JUNB co-regulates many EMT pathway genes, such that knockdown of JUNB can reverse the invasive, mesenchymal phenotype induced by loss of ARID1A. These studies suggest a potential therapeutic mechanism targeting AP-1 in order to inhibit invasive endometriosis. 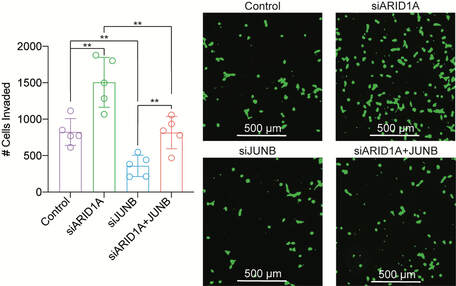 Early stage endometrial disease can often be treated with progestins, but response depends on progesterone receptor (PGR) expression. Here, we show that ARID1A loss prevents the upregulation of progesterone receptor following estrogen treatment. Additionally, we find that PGR is regulated by bivalent chromatin, harboring both H3K27me3 and H3K4me3 histone modifications. The phenotype of progesterone receptor loss can be partially rescued by inhibition of PRC2 subunit EZH2, a histone methyltransferase which often acts in an antagonistic manner to the SWI/SNF complex. Our results suggest the therapeutic utility in targeting EZH2 to restore progestin responses. 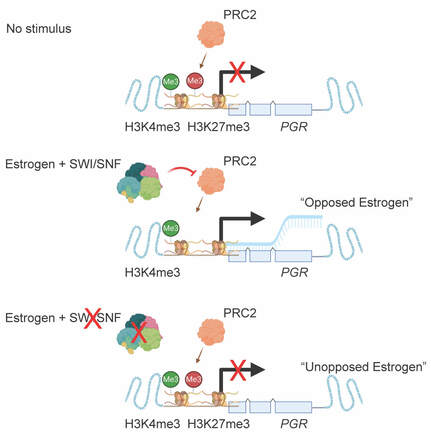 Here, we used genetically engineered mice, in vivo genomics, and public cancer patient data to understand the relationship between TP53 and ARID1A, two of the most commonly mutated genes in endometrial cancer, in the context of mutant PIK3CA. Mutations in TP53 and ARID1A change different aspects of endometrial cell health but also share some similarities. ARID1A mutations specifically promote cancer cells to invade nearby tissue, a hallmark of metastasis, associated with squamous differentiation. Mice with co-existing TP53 and ARID1A mutations developed more invasive disease. Our studies suggest that co-existing TP53 and ARID1A tumor mutations may promote invasion and metastasis. 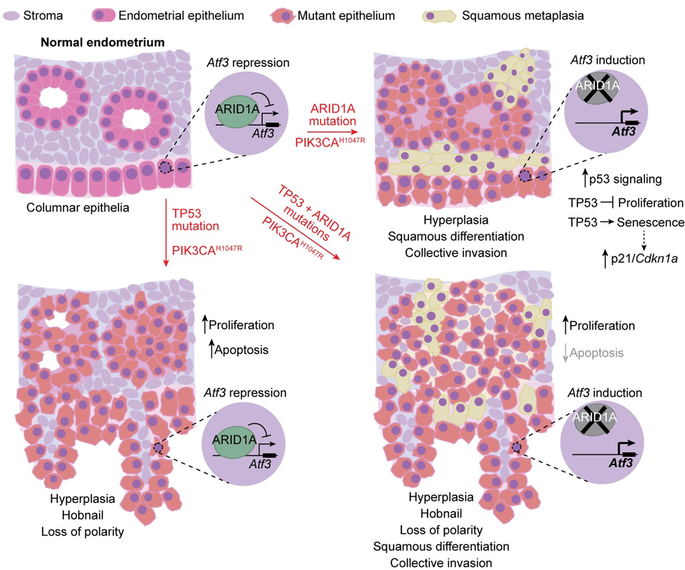 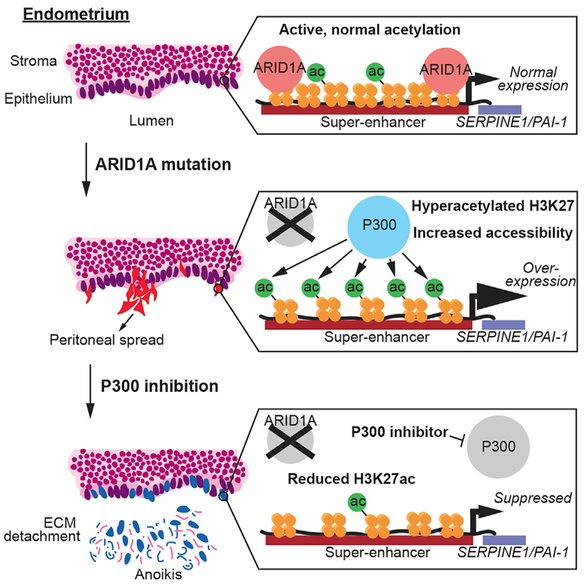 In endometrial cancer, ARID1A is the most frequently mutated subunit within the SWI/SNF chromatin remodeling complex, though mutations in other subunits are also observed. Here, we studied the effects of endometrial mutations in BRG1, which is one of two major catalytic subunits in the complex, and compare them to ARID1A. Through genetic models in human endometrial epithelial cells and mice, we found that BRG1 and ARID1A both normally prevent cellular invasion by promoting expression of epithelial identity genes involved in cellular adhesion and cell-cell junctions, even though they often regulate transcription in opposite ways at other genes across the genome. 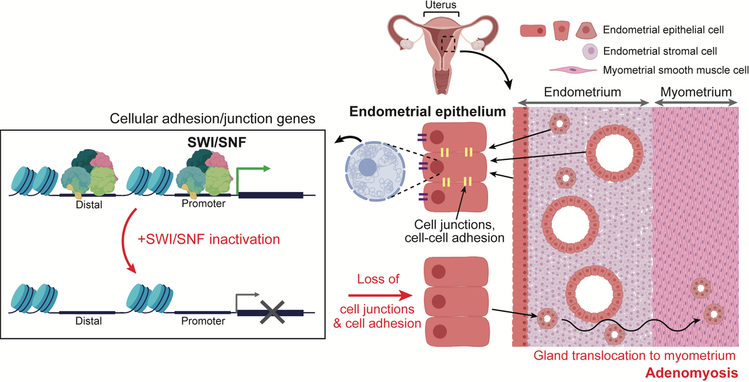 The Leucine Rich Repeat Containing G Protein-Coupled Receptor 5 (LGR5) labels tumor-prone stem cell populations in certain types of tissue. In this study, we show that ARID1A and PIK3CA mutations in LGR5-expressing cells result in renal angiosarcomas in adult mice. We further show that LGR5 labels endothelial progenitor cells within the descending vasa recta of the kidney, which give rise to renal medullary vasculature and are activated in response to ischemic kidney injury. 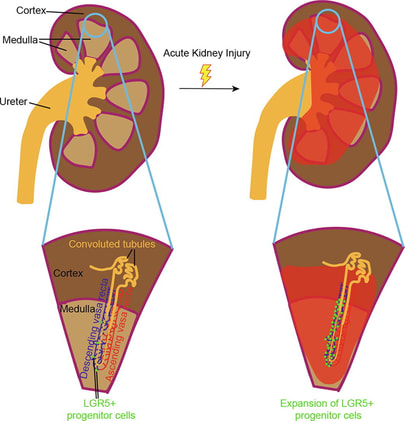 The Assay for Transposase-Accessible Chromatin (ATAC-seq) is a recently developed technique used to measure genome-wide chromatin accessibility, or where and to what extent genomic DNA is packaged within cells. This study reveals that analysis comparing ATAC-seq data between multiple cell conditions, such as with or without drug treatment, is not a straightforward procedure and can be heavily influenced by the steps used to analyze the data. Also included is a standardized bioinformatics workflow designed to help researchers appropriately analyze their own ATAC-seq data. 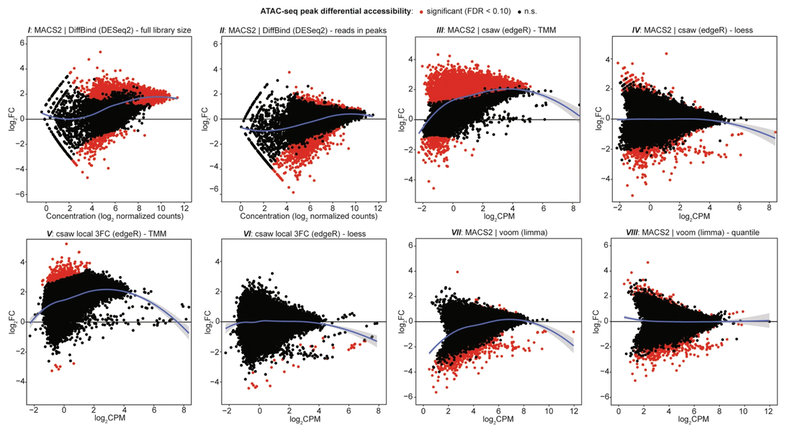 Endometriosis is a disease in which cells lining the uterus (endometrium) grow outside of the uterus, causing pain and infertility in 5 to 10% of women. Although mouse models of endometriosis have long been established, most models rely on intraperitoneal injection of uterine fragments, steroid hormone treatments or the use of immune-compromised mice. In this study, through a combination of genetic engineering and surgical approaches, we establish a mouse model of endometriosis which mimics the natural spread of the disease from the uterus to the peritoneum, ovaries and omentum.

Mutations in the ARID1A and PIK3CA genes are common in diseases originating from the endometrial epithelium, such as endometriosis and endometrial cancer. In this study, genetically engineered mice harboring mutations in both of these genes rapidly develop vaginal bleeding and other signs of endometrial pathology, including cellular invasion. Genomic techniques are then used to study the individual and combined effects of these mutations to understand their respective contributions to endometrial disease.